Alev Ebüzziya Siesbye was born in Istanbul in 1938.  She studied sculpture at the Istanbul Academy of Fine Arts from 1956-58, and worked for Royal Copenhagen from the early 60s.  She currently lives and works in Paris.

Siesbye was honoured with a retrospective at the Turkish and Islamic Arts Museum and the Danish Museum of Decorative Art in 2002.  She was made Chevalier de l'Ordre des Arts et des Lettres in France in 2009, and Knight of Dannebrogordenen in Denmark in 2000.

Her work is included in the collections of the Musée des Arts Décoratifs in Paris, the Victoria and Albert Museum in London and the Cooper-Hewitt Museum in New York, among many other museums. 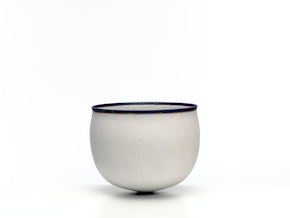