Anthony Benjamin was born in 1931 in Boarhunt, Hampshire. He began his studies in engineering at Southall Technical College and pursued his interest in art at the Regent Street Polytechnic in 1949, during which time he spent three months studying drawing in Paris with Fernand Léger and was awarded a silver medal for painting. Following his graduation in 1954, he worked in London and a year later moved to St Ives, where he developed a reputation as an abstract artist.

In 1956, Benjamin was approached by Peter Lanyon, who encouraged him to join the Newlyn Society of Artists. He soon after had his first solo exhibition at the Newlyn Art Gallery in 1958, which featured paintings abstracted from the Cornish landscape and sea. During these formative years, Benjamin studied and worked in Paris and Italy, before moving back to London where he lived with his partner, Nancy Patterson. In London, he began working with more intense colours and hues. He exhibited at the ICA in 1966 and then at the Museum of Modern Art in Oxford the following year, where he displayed large perspex and fibreglass sculptures.

Benjamin worked in several media, including painting, sculpture in wood, drawing, metal and plastics and, from 1967, he worked as a fine art professor in institutions throughout North America, including the University of Calgary, York University in Toronto, Hayward State College in California and the Ontario College of Art. After returning to Britain in 1973, he worked as a printmaker. He was a talented draftsman since his engineering apprenticeship and, in the late 1980's, began a series of large drawings in graphite. These were followed by a group of brightly coloured canvases which were still growing in scale at the time of his death in 2002.

Benjamin's work is held in many international public collections, such as the Tate Gallery, the Arts Council of Great Britain and The Art Gallery of Western Australia. 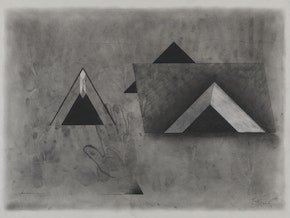