Ian Godfrey was born in Ely in 1942. He went to school in London, and later attended Camberwell Art School to study painting in 1957. There he began to make pottery, and trained in the department run by Dick Kendall with teachers who included Lucie Rie, Hans Coper and Ian Auld.

In 1962, Godfrey started his own pottery workshop in an Islington basement, and between 1967 and 68 he worked at the Royal College of Art on a pottery fellowship. Over the next few years his work became widely exhibited, and in 1974 he was awarded the gold medal at the international ceramics competition in Faenza.

In 1975 he moved to Denmark, where he set up and ran a domestic pottery workshop in Jutland. Godfrey returned to London in 1980 to start a new workshop in Highgate, which continued to be his base until his death in 1992.

Although from the beginning Ian Godfrey shared his workshops with other potters, he developed an entirely individual style with his own techniques, which included carving the almost dry clay with a pen-knife, as well as a personal repertory of forms. 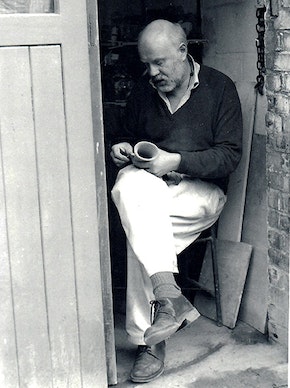 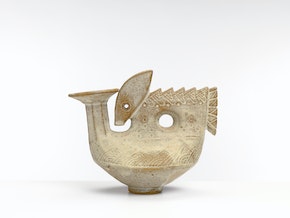