One of the most striking features of Jacqueline Lerat's art is her ability to confer on inherently static sculptural forms a subtle sense of movement, of suspended yet imminent action that endows their weighty mass with a touching biological vitality. Under her hands, robust stoneware volumes can take on all the responsive frailty of a swaying reed and even suggest, in clear contradiction of their evident material state, the notion of continuing growth, of rising sap, of germination yet to come.

Jacqueline Lerat, whose achievements over many years have earned her a pre-eminent place on the French ceramics scene, knows that the essence of the sculptor's art can only be revealed through an intense physical complicity with the raw material. With this in mind then, it is obvious that her recent works, created painstakingly under the conditions that advanced age implies, can be interpreted as metaphors for the state of her own frail body, just as they also tell us that music and dance are the disciplines that have probably influenced most lastingly her artistic output. For some time now, Jacqueline has insistently sought to explore, with diverse yet extremely spare means, the notion of verticality. Thus her new forms are sometimes reminiscent of those steps-up-a-single-trunk Lobi or Dogon ladders, yet when turned upside down, the forks become legged torsos seeking in one stride to modify their bond with the terra firma. Faced with these primevally elemental little stoneware figures, the spectator should move around them circumspectly, as his appreciation of their structure, of the implications of their forward-tilted posture, of their feigned instability, will all depend on whether his viewpoint is from the front, in profile, three-quarter, or from the back. The idea of the human body in motion is clearly an obsession.

Concise and introverted, these "body-artefacts" seem intentionally uncommunicative, offering only superficial hints as to how they were put together, like the web of fine scratch marks on the stoneware surface, the irregular gaps between the barely touching slabs, the lightly-corbelled overhangs or vertical grooves, tiny accidents which surreptitiously attract one’s attention and leave one amazed by their contribution to the existence of the whole. One continues to be fascinated by Lerat's enduring ability to "leave her mark" with so few slips to subtly colour the pieces, building up nuances and textures that both enrich and extend their formal wealth; rusty clouds that recall scrap iron left in the open air or dusty whites like the floured surface of a loaf of bread. After all, there’s nothing wrong with literal references like these! On the contrary, just think of the number of works of art, however abstract they may be, that inevitably evoke image all too real.

In preferring the spontaneous to the sophisticated, the instinctive to the well-thought-out, the artistic practice of modelling clay may well be seen today as an archaism or as a challenge to our modern technological society. Yet Jacqueline offers the spectator a set of discreet references that stand beyond both time and fashion, hoping they’ll serenely transmit her most intimate sentiments and, through these sculptures, "speak" of her will to transcend the fragility of life. Such conceptions may seem incompatible with our society of stress, of "youthism" and flashy appearances, so characterised by a ruthless struggle to survive and hysterical flitting from one consumer product to the next. For people today, who now require images and sculptures to be primarily "spectacles", Jacqueline Lerat's anti-spectacular works can impose their power on our gaze, only if we ourselves operate a necessary retreat into the isolation of contemplation, beyond the violence of reality, far from the world’s artificiality and hype. 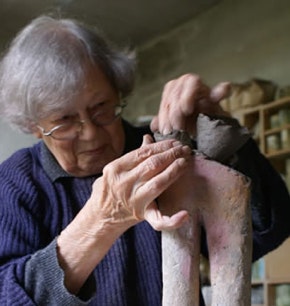 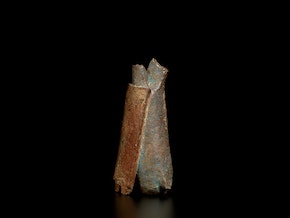