John Ward was born in London in 1938, and is regarded as one of the most important modern British potters. He first worked as a cameraman for the BBC and subsequently took a ceramics course at East Ham Technical College in London, before attending the Camberwell School of Arts & Crafts where he studied under the tutelage of Hans Coper and Lucie Rie. He established his first workshop in London in 1971, and spent several years as a part-time potter and teacher. He later moved to Pembrokeshire, West Wales in 1979 and focused entirely on making ceramics.

Ward’s pottery draws influence from a number of ancient and modern sources. He refers to the forms of ancient Chinese and Egyptian pre-glaze pottery and early Cypriot and Persian bowls, as well as the work of Coper, Rie and Ian Godfrey in creating his sculptural stoneware vessels. They are hand-built with flattened coils of clay and pinched bases, and the result is sometimes altered at the leather-hard stage by cutting and rejoining pieces to produce ridges and grooves between curving surfaces. They are then scraped and partly buffed with a stone, matt glazed by a combination of pouring, spraying and painting, and then usually fired twice in an electric kiln. His work is distinguished for its simple yet sometimes complex structures, often featuring abstract and geometric decoration. Ward has said,

“There is something compelling about the making of pots, regardless of function, which keeps me within the particular sphere; they are the focus of some many interests and associations. My aim is to make pots which have simple forms with integral decoration and aspects which can interact with the environment in interesting ways; to try and express a balance between these dynamic qualities and a sense of stillness or containment. Form above all, but expressed through light and colour. It is not surprising that the green, blue and ochre glazes have properties similar to some of the surface colours and textures of rocks and pebbles where I am living. Being near the sea has probably had an effect on the banded decoration I use, either reflecting the movement of water and waves or the dips and folds of the strata revealed in cliff faces. This in turn has affected form.’’ 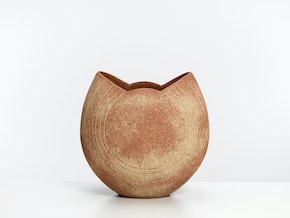