Born in Chigasaki, Japan in 1946, Masamichi Yoshikawa graduated from the Nippon Designer Institute in 1968, and then moved to Tokoname, a city renowned for its ceramic production since the 12th century.

He specialises in creating sculptural forms in porcelain with pale blue seihakuji glaze.  Yoshikawa’s works have received international recognition: he was awarded the Aichi Prefecture Arts and Culture Prize in 2006, the Grand Prize at the Taiwan International Ceramics Biennale in 2004 and a gold medal at the International Ceramics Festival in Vallauris, France in 2002, among others.  His work is also featured in many notable public collections including the Victoria and Albert Museum in London, the Musée National de Céramique in Sèvres, France, The Metropolitan Museum of Art in New York and the Incheon World Ceramic Centre in Korea. 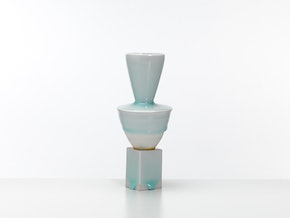