Shugo Takauchi was born in 1937 and is based in Mashiko of the Tochigi Prefecture in Japan.  He worked as a company employee before visiting Mashiko and discovering Shōji Hamada's work.  He then decided to leave his life as a salaryman and established his own kiln in 1968.

Since the late 1960's, he has had a very successful career as a potter with an extensive number of followers.  He primarily fires Mino, Shino and Oribe ash-glazed and black wares.  Takeuchi is recognised for his bucket-shaped forms; his creations often feature heavy walls, deep cuts and bold colours.

Takauchi was awarded the Tochigi Prefectural Cultural Prize in 1998, and he was also selected as one of Japan's top 100 potters by three critics in Honoho Geijutsu magazine.  His work may be viewed in a number of international public collections. 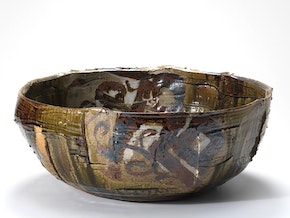