Simon Kidd is a Northern Irish artist who grew up in Belfast and is now based in Dublin.  He studied fine art in Belfast and Bristol before graduating with a Ceramic Design degree from Central Saint Martins in London in 2018.  He spent much of his childhood in the countryside, which is a defining characteristic of his ceramics.

His creations are meant to be symbolic of the importance and beauty of Northern Ireland and the Irish lands, as well as its history of violence and lasting legacy.

Kidd works in porcelain and stoneware, producing vessels that are either hand thrown, or slip cast in limited editions.  His slip casting utilises moulds of sculpted plaster before his construction of the final pieces by hand.  Kidd’s ceramics are made by tools and materials that had been collected from places that are special to him, and local to the area he’s highlighting in a particular body of work. The sleán, for instance, an Irish spade traditionally used for cutting turf, features in his making process. Kidd explained that his works are cut by “a tool which holds so much importance to all of Ireland, one which connects us to the land around us, the land which has kept us warm and has been a resting place for so many.”

Men walk the bogs, searching, gathering the remains. What was once the blood of the land it was cut from is now dried, twisted, distorted by the elements and fed into fire.    —Simon Kidd

Primarily influenced by Irish landscapes, his work is a reflection of how these landscapes have affected him, and is a response to particular places.  He once wrote, “These places are not only the places themselves but they are integral to who we are, our identity is made up so much of where we’re from, the places we’ve been, the places we go back to, the sights we’ve seen, the people we love, the people we’ve hurt, and the people we forgive.”  His art is not an imitation of geological formations or their aesthetic, but rather the result of what he finds within himself when experiencing such places that hold personal significance, which he describes as both beautiful and everlasting. 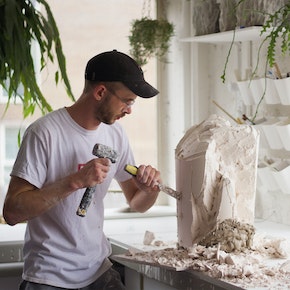 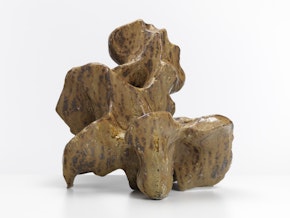