Yasuhisa Kohyama was born in 1936 in Shigaraki, a historically vital ceramics production centre in Japan. Kohyama was fifteen years old when he became employed by one of the largest ceramic factories in Shigaraki, Oumi Kagaku Touki. From 1958 until 1960, he took evening classes at a vocational training school, where he was taught basic techniques such as glazing and throwing on a potter’s wheel. A well-known ceramicist designer, Sakuzo Hineno, visited the factory in 1955 while he was working under a government scheme to improve the quality and originality of the ceramic arts in Japan. Following several workshops, Kohyama asked Hineno about being coached individually and was honoured by becoming an apprentice, specializing in tableware.

In the early 1960’s, Kohyama worked closely with designers, architects and contractors on important projects. He assisted the avant-garde artist Taro Okamoto in 1964 on a tile installation for the Olympic Stadium in Tokyo. He established his first studio in 1968, there he experimented and developed his cutting techniques. Later that year he had a successful exhibition in the Mitsukoshi store, attended by respected artists, including calligrapher Toko Shinoda, ceramicist Shoji Hamada and photographer Ken Domon.

Kohyama has played a significant part in reviving the use of the traditional Japanese ‘anagama’ wood-firing kiln, being the first potter in the area to build such a kiln since the Middle Ages.  He is a contemporary master of the ancient practice of Sueki, a method that originated in southern China, which accounts for his unglazed yet glassy surface textures. 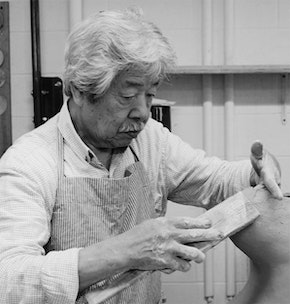 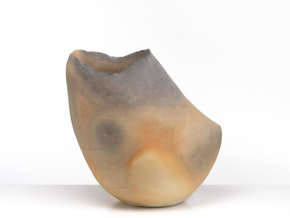