Born in Düsseldorf in 1927, Beate Kuhn studied art history and pottery at the University of Frieburg, and attended the Werkkunstschule Wiesbaden, where she learned to throw on the potter's wheel. She continued her study of ceramics at the Darmstadt Werkkunstschule and in 1952, began designing functional works for Rosenthal, a porcelain manufacturer in Selb.

In 1953, she took over a ceramic studio with potter Karl Scheid, and spent the rest of her career working alongside he and his wife, Ursula Scheid.

A highly respected figure in postwar German ceramics, Kuhn was awarded with a number of honours. In 1968, she became a member of the Académie Internationale de la Céramique in Geneva, and was awarded state prizes from Baden, Bavaria and Hesse.

Kuhn is represented by many private and public collections worldwide, including the Victoria and Albert Museum in London, Museum Boijmans van Beuningen in Rotterdam, the National Museum of Modern Art in Tokyo, Museum Bellerive in Zürich and the Kunstgewerbemuseum in Berlin. 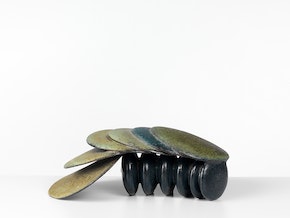