"Bernard Dejonghe is not a ‘coffee table’ artist, in the sense that his work is neither anecdotal nor pretty.

Bernard Dejonghe thinks in the grand manner. The visual aspect of his thoughts can be seen here in big slabs of voluptuous glazed ceramics and bold geometrical volumes of crystal clear glass both embodying, through a very personal vision of earth and sky, the essence of the universe.

The root of the art of Bernard Dejonghe is to be found in the sands of an immaculate African desert and in the stars of an unspoilt and inaccessible sky, both linked by the internal vision of ancient civilisations which, like unconscious and obsessive memories, seem to haunt his mind...

...The inspiration of Bernard Dejonghe is not only the result of mere dreams or personal obsessions, but of real physical research with scientists of the Musée d’Histoire Naturelle in Paris. With them he explored the remotest parts of the Sudan looking for prehistoric human settlements and the materialisation of celestial phenomena like the incredible fulgurites, natural desert glass produced by the shock of lightning on the sand. Those fulgurites in which sky and earth fuse so violently are, to my sense, one of the keys to the art of Bernard Dejonghe, and probably an indication of where his future work will lead him: to a total blend of ceramic and glass, two paths which, up to now, he has explored separately." 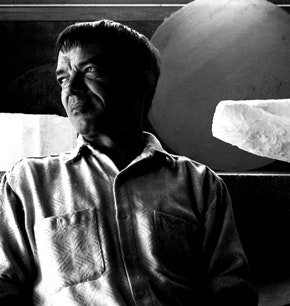 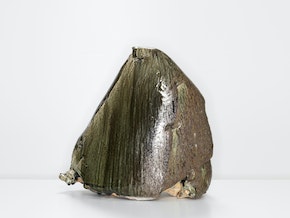