Elizabeth Fritsch was born in 1940 in Shropshire, England and began her studies at the Royal Academy of Music, which she attended between 1958 and 1964 as a student of the harp and piano.  She changed her concentration to ceramics and studied at the Royal College of Art from 1968 until 1971, during which time she worked with Hans Coper and Eduardo Paolozzi.  In 1970, Fritsch was awarded the college's Silver Medal and Herbert Memorial Prize.  In 1985, she set up a studio in East London and in 1972, she had her first solo show, at which time she wrote:

'Geometric rhythms became more rigorous and spatial games took over both in the painting and in the forms themselves, which started to become foreshortened, inhabiting the shadowy space halfway between two and three dimensions...I like the surreal and insubstantial feeling it gives to a form--giving it, in a very literal sense, 'edge.''

Fritsch's work is unique for its sharp profiles and architectural qualities, and is sometimes influenced by music, painting, literature and architecture.  Her vessels are handbuilt from stoneware using the coil method, and the resulting surface is then meticulously smoothed.  She colours her works with dry matte slips, and often applies geometric motifs.  Fritsch prefers to exhibit her work in small, carefully arranged groups, which creates a sophistocated interplay between the shapes of the vessels and their decoration.

A major retrospective of her ceramics was held at the National Museum of Wales in Cardiff in 2010, which featured some of her most significant pottery produced over many years paired with her more recent work.  Fritsch's work is owned by many private and public collections, including the Metropolitan Museum of Art in New York, the Victoria & Albert Museum in London and the Musée des Arts Décoratifs in Paris. 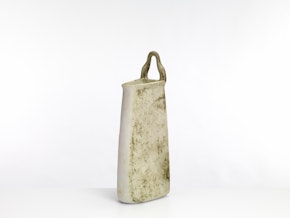