Born in Rønne on Bornholm, Denmark in 1913, Gertrud Hjorth was the third generation of the Hjorth family of potters.  She began working at her family’s pottery after finishing lower secondary school, and in 1930, she travelled to Copenhagen, where she studied ceramics at the Danish Museum of Art and Design’s School of Applied Art.  She also volunteered at Holmegaard Glassworks in Næstved on Zealand.

Gertrud married painter and graphic artist, Sigurd Vasegaard in 1935, and set up her own workshop in Holkadalen.  During these experimental years, she increased production of her own works, both in number and in quality.  She was fascinated by nature and geometric abstraction, evident in the leaf ornamentation and line patterns decorating her bowls, jugs and pots at this time.

In the late 1940s, Gertrud developed uranium and green celadon glazes and began to focus greater attention on her ornamental creativity.  She was particularly inspired by Chinese Song ceramics and Korean pottery.  Her delicate use of colours and natural motifs decorated the works she made for Bing & Grøndahl in 1957 and dinner sets for the Royal Copenhagen Porcelain Manufactory from 1959-62.  During these years, Gertrud participated in many foreign joint exhibitions and achieved worldwide fame.

Her artistic development continued to improve whilst being a member of the March Exhibition from 1968 to 1982, which comprised a small and exclusive group of abstract and figurative artists. From 1983, she continued working in her own studio, producing a relatively small number of pieces each year but with a unique combination of simplicity and richness.  She was skilled at orchestrating a balanced interaction of form, colour, body and ornament, and integrating vertical with horizontal elements.

She was awarded a gold medal at the Milan Triennale in 1957, the Eckersberg Medal in 1963, the Thorvald Bindesbøll Medal in 1981 and the C. F. Hansen Medal in 1992.  A retrospective exhibition of her work was held in 1984-85 at the Danish Museum of Art & Design in Copenhagen, the National Museum in Stockholm and the Holstebro Art Museum.  A second retrospective in 2011, held at the Holstebro and Bornholm museums, focused on the strength of her later work.

Gertrud is represented by many important public and private collections worldwide, including the Victoria and Albert Museum in London, the Boijmans Van Beuningen Museum in Rotterdam, the Museum of Art in Pennsylvania, The National Museum of Stockholm, as well as a number of royal collections. 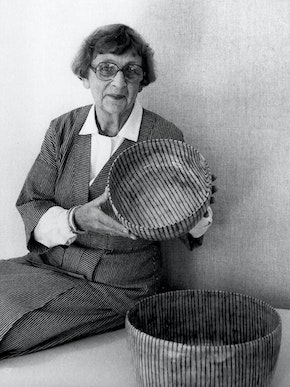 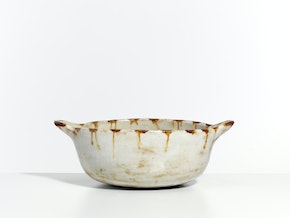