Hans Coper was an influential German-born British studio potter. Coper was born in Chemnitz, Germany and emigrated to Britain where he was interned as an enemy alien. He was transported to Canada where he was held there for two years until he transferred back to Britain in 1942, where he enrolled into the British Pioneer Corps.

It was not until 1946 when Coper started working as an assistant in Lucie Rie’s Studio even though he had no previous experience in ceramics. From there his talent quickly emerged, Lucie Rie saw his potential in becoming an established artist and so sent him to Heber Matthews who taught him how to make pots on the wheel. One of his first major exhibitions was in Berkeley Galleries in London in 1950, a joint show with Lucie Rie.

He left in 1958 and moved to Digswell House in Hertfordshire, where he was offered residency in one of their studios. During this time, he experimented and developed his ceramics, making them quite abstract and sculptural. Coper’s artworks are usually made up of individual and separately thrown shapes on the potters wheel which he then manipulated and assembled by hand until he achieved a abstract sculptural form. The surfaces of most of his artworks were usually roughly textured and coloured with oxides, mainly manganese oxide.

In the 1960’s he taught pottery at Camberwell School of Art and the Royal College of Art. Eventually he moved back into London in 1963 and after that lived in Frome, Somerset from 1967 until the his death in 1981.

Coper’s work is often compared to that of Lucie Rie’s because of their close association; however, the two styles are very different, Rie’s work is more functional and traditional unlike Coper’s more abstract non functional ceramics which were considered very ahead of their time.

Coper’s work can be found today in the collections of major museums worldwide, including the Victoria & Albert Museum, the Metropolitan Museum of Art and the Sainsbury Collection. Coper’s work was widely exhibited and even collected throughout his lifetime.

There have been successful retrospectives of his ceramics joined with Lucie Rie’s in 1994 at the Metropolitan Museum of Art and then three years later in the Barbican Art Gallery. 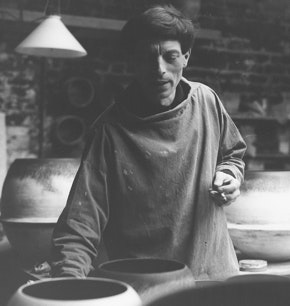 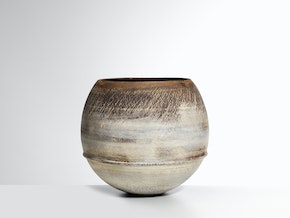