Karen Bennicke is an acclaimed Danish artist whose work is featured in many important international public collections, including the Victoria and Albert Museum in London, The Museum of Modern Ceramic Art in Gifu, The Nationalmuseum of Stockholm and The Designmuseum Danmark in Copenhagen.

Bennicke describes her work as "constructions, reminiscent of architecture, that constitute a kind of form-bearing membranes between the exterior and the interior." She creates sensorial and complex geometric forms by looking at landscapes and urban structures.  A poem that she wrote in 1995 explains her making process,

I am fascinated with form -
see it everywhere
Play with it,
screw up one eye,
find connections
- and contrasts.
On a quest for expression.

Her work rejects the traditional methods of making wheel-thrown ceramics in favour of a process of using moulds and hand-building with slabs of clay.  It demonstrates a more unpredictable and experimental approach, as well as her concentration on conceptual and unadorned sculpture.  Bennicke is one of Denmark's most boundary-defying artists, having been influenced by Italian futurism, Suprematism and the Bauhaus during the early stages of her career.

"The work of Karen Bennicke does not have instantly recognisable characteristic shapes or forms.  What is typical, however, is the baffling confusion the pieces create in having numerous distantly familiar references, yet defying easy identification.  The duality is perhaps a defining feature, but with every new collection, and even from piece to piece, Bennicke's work can change almost beyond recognition.  The audience is always kept guessing." -- Edmund de Waal 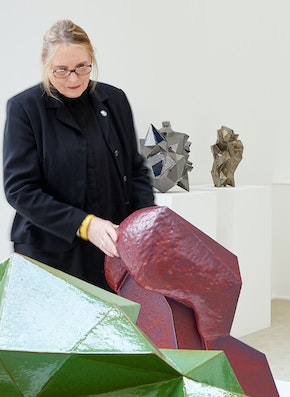 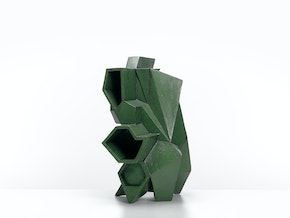