Kenji Hara was born in Tokyo in 1947, and studied ceramics in Tajimi as an apprentice of Living National Treasure, Takuo Kato from 1967.  In the early 1980s, Hara became independent and moved to Taihei, where he built a kiln and began making Kiseto (yellow Seto) ware.

Today, Hara lives in the mountains of Mino, where he collects local soil, makes his own clay, crushes feldspars with stone mills and refines his glazes.

Hara was honoured with a solo exhibition in 1990 at the Matsuzakaya Department Store in Nagoya, which celebrated his 20th anniversary as a potter.  His work has been exhibited in public museums and collections, including the Tokyo Metropolitan Teien Art Museum in 2003 and the Furukawa Museum in Nagoya in 2008.  His work is included in the permanent collection of the Museum of Fine Arts in Gifu and has been illustrated in several international publications. 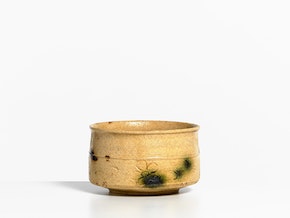