Koji Hatakeyama was born in 1956 in the Toyama Prefecture of Japan.

Hatakeyama grew up in Takaoka, a city renowned for metal casting. He makes unpretentious cast bronze articles, particularly lidded boxes, which are not intended to necessarily be functional. He is more interested in the artistic worth of a piece, or as he has quoted ‘every article I make should live.’

He has exhibited widely in Japan and abroad.  Between 1996 and 98 his work was featured in a travelling exhibition, ‘Contemporary Japanese Crafts,' which was shown in Thailand, China and Denmark. In 2002 he participated in an exhibition, ‘Hands On’ at the Philadelphia Museum and in 2003 ‘Twist in Japan’ at the Musee des Beaux-Arts de Nancy, France. Most recently in September 2012, his larger works were included in a major exhibition at the National Museum of Modern Arts & Crafts in Tokyo.

Hatakeyama's work may be viewed in many international public collections, including the National Museum of Modern Art in Tokyo, the Victoria and Albert Museum and the Philadelphia Museum of Art.

Most of my pieces are made of cast bronze.
Bronze is an alloy of copper and tin.
I make by pouring the molten metal into the mould.
Bronze melts at one thousand two hundred degrees centigrade.

Casting bronze has a long history,
going back about four thousand years.
I perform it in modern technique.
But the basics are ancient
using almost the same methods.

My cast bronze lidded boxes
are not always meant to be functional.
The lidded box contains both the inner and outer space.
You could feel both the spaces because of the lid.
So the lid can be important for my works.
I add gold and silver leaf to the interior.

The colours on the surface
are achieved by various chemicals with different temperatures.
This method is based on Japanese traditional techniques
however I changed and arranged it in my own way.

All my colours are patination of bronze. Not painting colours.
The colour is a patina that naturally happens.
I feel, the colour of patination is
a little bit proof of the nature of bronze.

I consider, every material hides its own character
and I believe that
it is my role to draw it out.

I want to draw out the quality of bronze.
And my action of casting is
not just an action.
I feel I devote my essence into the mould.

My work is a collaboration of
the consciousness with bronze and myself. 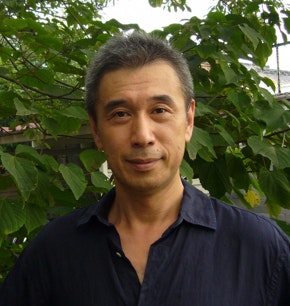