Liam Flynn was born in 1969 in Abbeyfeale, a town in County Limerick, and became one of Ireland’s most talented artists.  Following his family’s tradition of working with wood, Flynn was devoted to woodturning since he was a child, having inherited the workshop of his father and grandfather.

Predominately self-taught, mainly from woodworking magazines and books, Flynn learned to make furniture as a child, and as a teenager he discovered lathe woodturning.  Emphasising the grain and other visual features of the wood was the trend in woodturning when Flynn began his craft, as was using exotic woods; however, he favoured locally sourced woods, working in oak, ash and sycamore, and his interest developed primarily into accentuating the forms and lines of his vessels.  He explained, “the challenge is to keep reinterpreting the forms . . . I’m always striving to find the perfect line.”

He concentrated on creating vessels with a hollow body, characterised by a thin wall with a narrow opening at the top, as he delighted in the way that such pieces appeared as aesthetic, rather than functional objects.  His mastery of this technically challenging design was influenced by American turner, David Ellsworth.  Flynn produced variations of this form throughout his career.

“I feel as if I’ve been making the same piece for almost 30 years.  Someone said to me recently that he thinks my work is about memory, in particular my fluted pieces, ‘that every slice of the chisel leaves an imprint that captures that particular moment in time.' There is also the memory of the pieces I’ve made before and of course the memory of the actual tree itself.  The space between each growth ring is a record of each particular year.” — Flynn

Flynn was especially renowned for his double-rim vessels.  Having developed the double rim through experimentation, he considered this creation as the defining characteristic of his style, one that made his work particularly unique.  He would turn one rim on the outside, and another rim on the inside of a vessel, effectively giving the illusion of a vessel within a vessel.  He liked the mystery this gave to the piece, achieved through a captivating play of light between the different layers.

“The planning for my work starts not at the lathe, but when I’m standing over a log, trying to figure out what sort of vessel will fit into a particular piece of wood…the way I cut the piece from the log can determine the final shape of the vessel. I like to think that I can interpret what way the wood is going to warp but sometimes it can surprise me.” — Flynn

Flynn’s practice of turning wood on a lathe while it was still wet, or ‘green turning,’ allowed the wood to change shape as it dried.  He explained, “movement is a major theme in my work. Because I use green, unseasoned wood, I like to treat the wood as if it were a malleable material; gently removing the excess from the inside, pushing the wood into fluid forms.”  The finished piece is thus an unpredictable union of his technical skill and the chance movement of the wood.  He often blackened his works, which helped to accentuate their forms, carved fluting and other patterns.

Internationally recognised for his achievements in woodturning, Flynn was a recipient of several awards and his works are owned by many important public collections.  He was the inaugural winner of the Crafts Council of Ireland Bursary award in 2005, and in 1996 he won the California Godlier Medal at the Royal Dublin Society National Crafts Competition.  He was a member of the Irish Woodturners Guild and gave demonstrations of his craft around the world.  In 2011, an image of his work was featured on a special-edition Irish postage stamp, and he was also celebrated by a retrospective held at the Hunt Museum in Limerick.  His vessels can be viewed in the permanent collections of the Fitzwilliam Museum in Cambridge, the Minneapolis Institute of Arts, the national museums of Ireland and Scotland, and the Victoria and Albert Museum in London, among others.

“An encounter with a Liam Flynn vessel can be an emotional experience.  His pieces are achingly beautiful; they have a brooding presence, a sense of rightness, an air of confidence.” — Flynn’s friend, Roger Bennett

Flynn died in 2017, and is remembered by many as a modern master of woodturning, having helped to elevate the craft to a form of sculpture within fine art collections.  The Irish Arts Review called Flynn “one of the world’s most innovative and creative woodturners.”

“It is hard to find a measure for just how talented Liam was but, if Ireland honoured craftspeople as they are honoured in Japan, he would have already long been designated a Living National Treasure, a tangible cultural asset embodying the standard all craftspeople should aspire to. This is not based on sentiment due to his sad and premature death but on a long-standing, personal belief that he was Ireland’s most outstanding craftsman in any discipline.” — Leslie Reed, Former CEO of Crafts Council of Ireland

Portrait of Liam Flynn; courtesy of Mary Leahy and the Liam Flynn Estate. 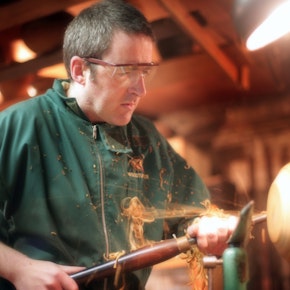 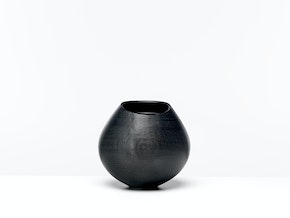