Lucie Rie was born in 1902 in Vienna. She completed her studies in 1926 at the Kunstgewerbeschule, and then worked in Michael Powolny's studio for six months. Rie enjoyed considerable success in Vienna and took part in international exhibitions before escaping to London as a refugee in 1938. She opened her own studio in Albion Mews in 1939, where she established her own style stimulated by trends in architecture and design.

Her work did not conform to the criteria established by local, contemporary studio potters, Bernard Leach and William Staite Murry. She developed her own visual language and created vessels whose glazes and textures enhanced the simplicity and clarity of their forms.

An artist primarily concerned with producing practical, functional wares, Rie became internationally known, and increasingly influential, for her vases and bowls. Owing partially to ancient Greek and Oriental ceramics, some signature features of her work include a use of inlaid lines, or sgraffito, and a thick texture coating extraordinarily delicate and eloquent pieces which were applied with a coarse brush rather than copying trends of dip glazing.

One of Britain’s greatest 20th century potters, Rie had become the recipient of several awards for her outstanding achievements. She won prizes at the Brussels International Exhibition in 1935, the Milan Triennial in 1936 and the Paris International Exhibition in 1937. She taught at the Camberwell College of Arts from 1960 to 1971, during which time she also received an honorary doctorate from the Royal College of Art in 1969, the OBE in 1968, the CBE in 1981 and was made a Dame in 1991.

Rie’s earliest London exhibitions began in 1949 at the Berkeley Galleries. From 1954 she often exhibited individually or with Hans Coper in cities such as New York, Minneapolis, Gothenburg, Rotterdam, Arnhem, Hamburg, Düsseldorf and extensively throughout Britain. She continued to work into her late eighties. Following her death in London in 1995, the Sainsbury Centre for Visual Arts, the Victoria and Albert Museum as well as museums throughout Japan have held major retrospective exhibitions of her work. 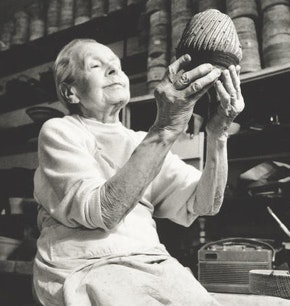 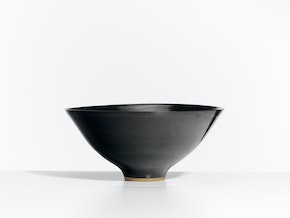