Sako creates pieces using Mokume-gane, a Japanese metal technique dating back to the 17th century. This technique involves the layering and bonding of very thin, multi-coloured alloyed metal sheets, which are then cut or drilled into and reworked. Although his work is based on research and experimentation using this traditional process, he manages to create very contemporary pieces.  In 2004 he became a member of the Nihon Kogeikai (Japanese Handcrafts Association) and in 2013, from his first exhibition outside Japan, the Victoria and Albert Museum acquired one of his pieces for their public collection. In 2018 he was one of the finalists for the prestigious LOEWE Craft Prize, and his work was displayed at the Design Museum London. 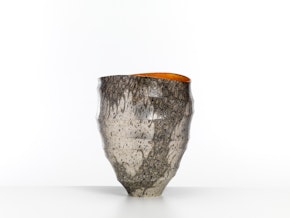