Born in 1950 on a small island in Nagasaki, Ryūichi Kakurezaki studied design at Osaka University of the Arts, and graduated in 1977.  He established his own studio in 1986, and currently lives and works in Imbe, a production centre since the medieval period for Bizen ware.

Whilst his work follows the traditions and techniques of Bizen pottery, he is often considered an experimental artist.

Kakurezaki was honoured with a retrospective exhibition at Musée Tomo, Tokyo in 2014, and has been represented in many international exhibitions.  His work has been collected by renowned museums such as the Victoria and Albert Museum in London, the National Museum of Modern Art in Tokyo and the Museum of Fine Arts in Boston. 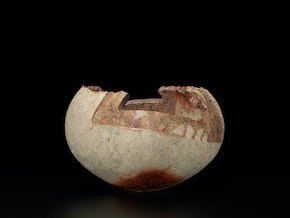