Born in Tokyo in 1894, Shōji Hamada was to become one of the most influential potters of the 20th century. He attended Tokyo Technical College and studied ceramic and folk crafts. His work was informed by diverse sources such as Korean pottery, English medieval pottery and Okinawan stoneware which influenced him during his extensive, international travels.

He built a climbing kiln at St Ives, England with Bernard Leach and the two travelled throughout the United States together, giving ceramic demonstrations and workshops.

Hamada was designated a Living National Treasure in 1955 and received many other honors, including the Tochigi Prefecture Culture Award, Minister of Education Award for Art, Okinawa Times Award and the Order of Culture from the Emperor. He was also appointed Director of the Japan Folk Art Museum. A book illustrating his achievements, 'Shoji Hamada: Collected Works' was published in 1961, and in 1973 he received an honorary Doctor of Art degree from the Royal College of Art in London.

The Mashiko Sankokan Museum was built in his home, completed four years before Hamada's death in 1978. 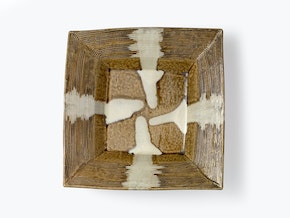