Shoji Kamoda was born in Kishiwada of the Osaka prefecture in 1933, and became one of the most influential potters of post-war Japan. Praised by experts as the leading ceramic artist of the 20th century, Kamoda was exceptionally productive before his premature death in 1983.

He studied ceramics at Kyoto City University of Arts and began producing ash glaze pottery in Anagama kilns in the early 1960s. He was recognised with major exhibitions including his first solo show in Tokyo in 1965, and in 1966 he won the Japan Ceramics Association Award.

He is known for his stoneware vessels, unique for their imaginative forms and lines, glaze and decoration. 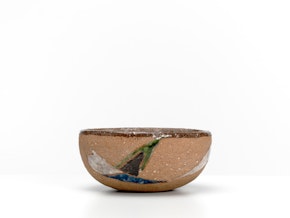