Born in Chiayi in 1974, Zung-Lung Tsai is a young Taiwanese potter showing for the first time in the United Kingdom.

“The hidden tranquil space in the work is like a cave; it has incredible power.  It is not just a visibly real space but also builds and strengthens the work’s content.  There the eyes can find rest, the brain can think in peace, and moods can turn around and settle inside.” —Zung-Lung Tsai 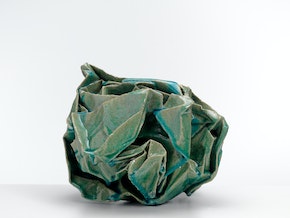