Gordon Baldwin was born in Lincoln, England in 1932, and studied painting and pottery at the Lincoln School of Art and then at the Central School of Art and Design. He became a teacher of ceramics and sculpture at Eton College and has since become one of the world’s most distinguished ceramic artists.

His early work featured functional stoneware vessels and tin-glazed earthenware, and often reflected his fascination with landscape. As he developed as an artist, his work became influenced by contemporary sculpture. In the 1950’s, he employed a variety of techniques and began hand-building, using both earthenware and stoneware, often reworking and re-firing pieces several times. He is recognised for the rich variety of forms he builds which combine sculptural form with abstract painterly marks. Baldwin has been very influential in moving ceramics towards sculpted structures and away from traditional functional pots.

Baldwin has described his approach as ‘a non search for beauty,’ finding most satisfaction in ‘forms which have a certain awkward resonance,’ a more challenging purity and strength. Today, he is based at his home in Shropshire.

Baldwin has received many awards throughout his career, including an OBE in 1992 and an honorary doctorate from the Royal College of Art in London in 2000. He was short listed for the Jerwood Ceramic Prize in 1996, and to mark his 80th birthday, there was a touring exhibition and retrospective of his work in 2012. He has exhibited his sculptures internationally and is represented in many public collections.

"The role I take is Artist as Explorer with the vessel as my basic structure (like the structure of a Haiku). Each piece begins out of a strange compulsion to take a certain action. I suppose the compulsion comes from things heard, things seen, things read and things done by drawing and previous work. I usually work in series constructing by the traditional method of coiling, discovering the piece as I proceed. It is an intuitive process carried on without analytical thought. The piece is made when the resonances are right. The Titles hint at the effect the pieces have on me and the contacts that have been made within the soup of my experience. The surfaces are dealt with weeks or months later. A lot of staring at the piece is involved - a sort of thoughtless gaze until there is a necessity for action. Of course each new piece is informed by the experiences I have already had in the studio. Different sorts of darkness and different sorts of silence are concepts that interest me. I work from an inner compulsion to explore my identity." 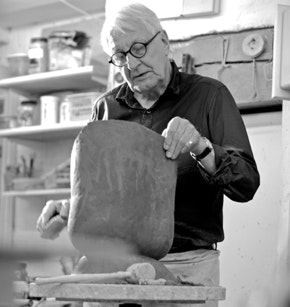 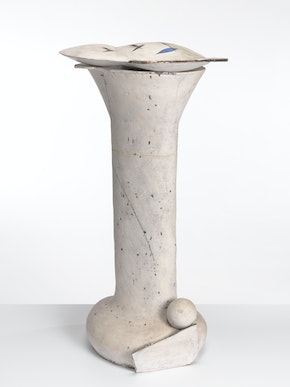