Born in Hamburg in 1919, Ruth Duckworth came to Britain in 1936 as a refugee from the Nazi regime to join her sister, Renate, and attended the Liverpool School of Art. She studied drawing, painting and sculpture until 1940. Her first commission was to carve, in limestone, the Fourteen Stations of the Cross. They may still be seen hanging on the walls at St. Joseph's Church in New Malden, Surrey.

In the late 1940's, Duckworth moved to London where her parents (who were also refugees from Hitler) lived. In the mid-50's, she became more involved with ceramics and went to study at the Central School of Art to learn about glazes. While she was there she developed a highly individual approach, working both in porcelain and stoneware. She eventually became an instructor at the Central School and taught there for many years.

She approached clay as a sculptor rather than as a potter, and brought an aesthetic rigour to her refined vessel forms, figurative sculptures and installations. She helped shape a new way of thinking about ceramics in the second half of the 20th century, and was the recipient of many awards for her extraordinary contribution to the arts.

In 1962, Duckworth was offered a one-year sabbatical to teach in the United States at the University of Chicago where she began her work of large-scale sculptures and wall pieces and continued to create smaller vessel forms. She ultimately decided to set up a studio and remain in the United States. Following a brief illness, she died in Chicago in 2009.

Her work is featured in many international museum collections, including the Metropolitan Museum of Art in New York and the Victoria & Albert Museum in London. 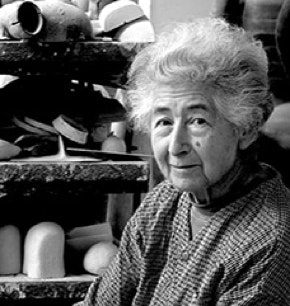