Chieko Katsumata was born in 1950 in the Shizuoka Prefecture of Japan.  In 1973 she moved to France, where she began working in ceramics, and in 1977 she returned to Japan and became an independent artist in Kyoto.

Katsumata's work is inspired by vegetable and plant forms. Her hand-pinched works are fired many times with the outer layers of clay slip coloured with metallic dyes and pigments, which are applied through gauze with a brush and multiple firings. Her work has been represented in major exhibitions held in international museums, including the Sèvres Museum, Paris in 2006 and the Smith College Museum of Art in Northampton, Massachusetts in 2009. 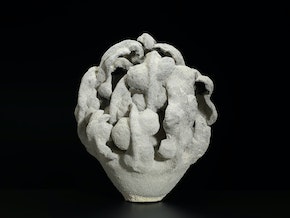